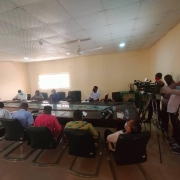 The Nigerian Institute of Animal Science (NIAS) was established by Act No. 26 of 2007 (as Amended 2015). It is a regulatory agency under the Federal Ministry of Agriculture and Rural Development with mandates to regulate all matters pertaining to Animal Husbandry in Nigeria, including the advancement of education, science, technology and the art of animal science and livestock production.

POLICY DIALOGUE ON TRANSFORMATION OF GRAZING RESERVES TO RANCHES after a joint meeting with the FAO on April 17, 2017. The Institute reiterates that this policy is adopted immediately. 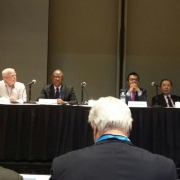 Strong institution and legislations are necessary to govern the policy and regulatory frame work in the feed industry. Proper legislations will ensure removal of many obstacles that have hitherto affected the feed sector in Africa particularly Nigeria. The future of the feed industry lies with regulatory activities and greater involvement of professionals to drive the new level of growth expected in the industry. Professional Animal Scientists are determined to shape it and will no longer leave things to chance.

The active role played by NIAS in the feed industry in Nigeria was rewarded in the recent NIAS hosted the first pilot Train-the-Trainer programme in Africa, organized by International Feed Industry Federation (IFIF) and FAO. International Feed Industry Federation acknowledged that Nigeria has sizeable feed industry, growth potentials, legal framework and one of the emerging Animal feed producers with better opportunity to penetrate the International feed export market. In view of this NIAS was nominated as the Secretariat of IFIF in Nigeria. The Institute led a team to the 10th International Feed Regulators Meeting (IFRM) in Atlanta USA, which took place on 30-31 January 2017. The forum provided opportunity for all inclusive dialogue with stakeholders to create the necessary structure and legislations that will enhance the quality control in the feed industry. 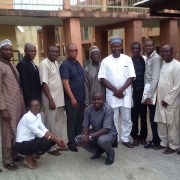 As feed production in Nigeria continues to expand in volume and value in response to increase in demand from Farm establishments, capacity building of stakeholders in the industry is one of the key priorities.

To ensure multiplier effect of the IFIF/FAO train – the – trainer pilot project held in Nigeria in 2015, NIAS have started implementing the post IFIF action plan to train other stakeholders transcending different geopolitical zones of Nigeria. The training which began in Kaduna was designed to build capacity of relevant stakeholder for increase feed safety and feed quality at production level both for industrial and on farm mixing, address the requirements of the sector while meeting the individual training needs of participants. In his closing remarks at the workshop held in Kaduna, the Registrar/CEO Prof. E. A. Iyayi thanked the participants and disclosed that the Institute will not renege on ensuring high premium on quality and standardization of feed in Nigeria. He however, called for collective actions among all stakeholders. 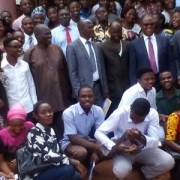 On arrival, the team was received by Director Academic planning who later introduced members of the team to the Vice-Chancellor who was represented by the Deputy Vice-Chancellor Administration. The Registrar/CEO Prof. E. A. Iyayi in his opening remark thanked the University management for allowing the Institute to come in and verify resources used in teaching Animal science programme in the University. Furthermore, he said the demand for a protein of Animal origin will continue to increase each year, due to population increase which is projected to reach 9.2 billion by 2050.

In response, the deputy vice Chancellor Administration expressed gratitude to the team and informed the team that the University has put in place the basic facilities required for the Animal Science programme in spite of the economic recession. He gave an analogy that an outsider can best detect what has gone wrong with your house, he, therefore, implore the team to carry out a holistic assessment and report back their findings.

At the exit meeting, the Head of Accreditation and Curriculum Mr. Peter Alike briefed the Vice-chancellor and University management on the outcome of the exercise. He expressed satisfaction in some areas and drew the attention of the University management to some existing gaps which require attention. Responding to the Deputy Vice-Chancellor Administration thanked the NIAS team for observations and genuine comments made by the team. Furthermore, he said, the University authority is constrained by the inadequate funding but assured the team of the University’s commitment to addressing the existing gaps identified by the team to engender quality. 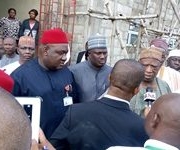 The Registrar/CEO Nigerian Institute of Animal Science Prof. E. A. Iyayi, Council President Prof. I .F. Adu and the Management team of NIAS received the Senate Committee on Agriculture and Rural Development. In his opening remark, Registrar commended the current administration of President Buhari for putting Agriculture on the front burner for economic diversification. He said the Institute through its mandate has keyed into the Green alternative programme through the various livestock value chain.  He later gave an account of the 2016 budget implementation details to the Senate Committee on Agriculture and Rural Development. Registrar informed the distinguished Senators that Institute faced some daunting challenges in the course of the year 2016, notable among these are the untimely release of the capital budget, eviction from Office accommodation at Gwarimpa due to unpaid rent and Salary shortfall.

In response, the Chairman of the Senate Committee on Agriculture Senator Adamu Abdullahi appreciated the sacrifice made by the Institute to have left the city center to a rural setting in uncompleted office accommodation. He also observed that of all MDAs visited fund appropriated for NIAS was least. He, therefore, pledged the Committee’s support within its powers. 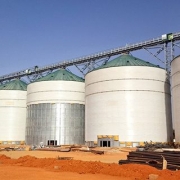 Notice is hereby given to feedmill operators, premix manufacturers, importers of premix, amino acids and feed additives to register their premises with the Nigerian Institute Animal Science in accordance with Federal Government Gazette no 137, Vol. 104 of Animal 2017 on Regulation for feed milling industry in Nigeria. Operators should check the category to which they belong and follow the payment procedure as stated below.
Please note that it is now an offence to operate feed business in Nigeria without registering your premises.
Thank you.